We held our annual meeting today at Saffron Lane Stadium. We reviewed the year 2018 and made plans for the future.  Lots of ideas and plans.  We ran more than 60 events last year and plan to increase this in 2019.  It was to thank our participants, volunteers, session leaders and partners for delivering such a great outcome.  Look forward to seeing our participants in 2019.  We start with a session for West Gate School on Monday 21st January!

One important decision was to raise funds for setting up our headquarters at Saffron Stadium.  The members visited our new facility and discussed plans for improvements in security and maintenance equipment such as cycle stands and tools.  When applying for grants we will show our video to funding organisations so that they can see what it is that we do.   See below!

Good to be at @LeicesterWFA AGM yesterday and to learn that we'll be getting bigger and better space as a base for our operations. One immediate advantage will be to allow our participants greater involvement in choosing which bikes they would like to try https://t.co/dsN4oUCHPt pic.twitter.com/iwmKmB7veW

Leicester Wheels for All AGM was today … https://t.co/GMROtDu4E8

On November 13th we took part in a great event involving Leicester Changing Diabetes, Ride Leicester and St Matthews Bicycle Club. The event was part of an international project to set goals and design interventions to drive down the number of people with Type 2 diabetes in their locality. Meeting these goals requires working together across sectors and disciplines, uniting stakeholders behind a common cause.  Leicester Wheels for All is pleased to be involved in this initiative – we are all about helping everyone to enjoy cycling and improving their health and wellbeing, whatever their abilities. The aim of the event was to encourage everyone to have a go on a bike and skill share so they may be inspired to take up the hobby in the future. 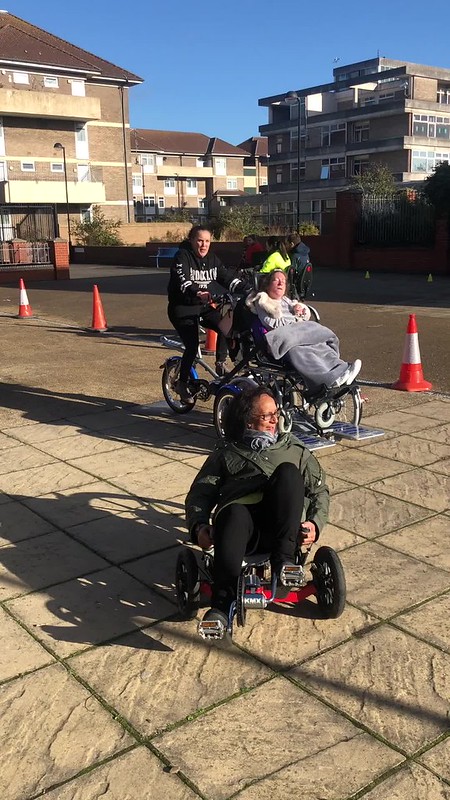 The world is rapidly urbanising, changing not just where we live, but the way we live. Today, the way cities are designed, built and run risks fueling the health challenges of their citizens.

Urban environments are already home to two-thirds of people with diabetes. This makes cities the front line in the fight against Type 2 diabetes – and where we must take action to hold back the alarming rise of the condition.

On Tuesday, Brais Dacal, a member of Pro Cycling Team Novo Nordisk came along to talk to locals about getting active.  All Novo Nordisk members have Type 1 diabetes and they race to inspire, educate and empower anyone affected by diabetes.   Brais explained to us that the team sees everyone who is affected by diabetes as part of their team and this includes those who are at high risk of developing diabetes. Brais is an athlete ambassador for the team. Novo Nordisk is a global healthcare company that supplies insulin.

Here is a shot of Brais on our long recumbent with Dr Dierdre Harrington, of Leicester’s Diabetes Research Centre, riding the ever popular KMX cycle. 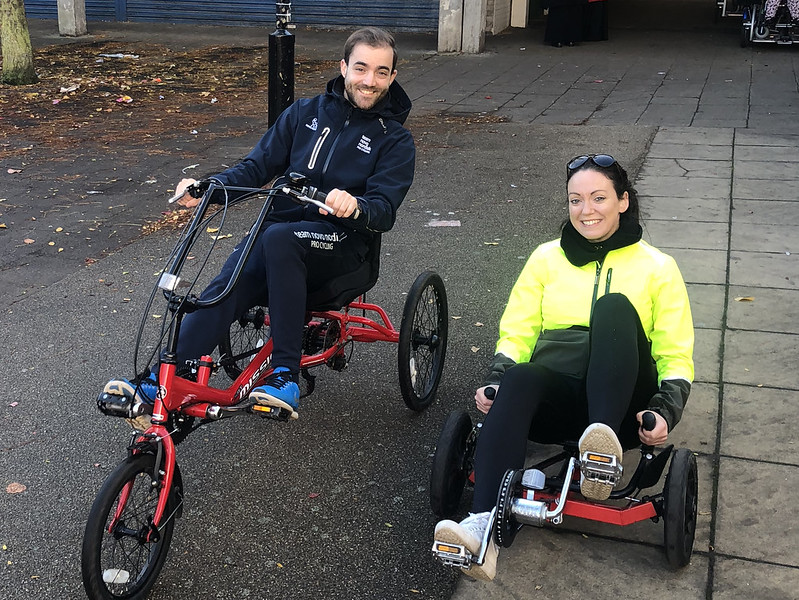 Ride Leicester was there with the Christiana Bikes and information about the Open Streets cycling events.

Phil Southerland, co-founder and CEO of the team, and Novo Nordisk came together to create the pro cycling team, based on a shared vision to inspire, educate and empower people around the world affected by diabetes.

In 2006, Phil Southerland and Joe Eldridge assembled a group of eight cyclists with type 1 diabetes to take on the gruelling 3,000 mile Race Across America and raise diabetes awareness. The team went on to win the event in 2007, 2009 and 2010 and quickly became a magnet for endurance athletes with diabetes.